Spine And Pain Specialist in Lucknow Dr. Ashish Jain is one of the most esteemed Spine And Pain Specialist, Orthopedist and Spine Surgeon in Lucknow.He holds an experience of 16 years in medical field. He has been been honored with SRS - Scoliosis Fellowship - 2017 award, CUK Cervical Spine Fellowship - 2015 award, AO Spine Fellowship - 2014 award and IOA Synthes Fellowship - 2013 award. He has completed his Fellow in Spine Surgery from Catholic University of Korea College of Medicine in 2015, Medtronics Spine Fellowship from Indian Spinal Injury Center in 2014, Diploma - SICOT from SICOT, Belgium in 2013, Certificate in Research Methodology from Indian Institutes of public Health in 2013, Fellow in Spine Surgery from Orthopedische Klinik Markgroningen, Germany in 2013, M.Ch - Orthopaedics from USAIM (University of Seychelles,American Institute of Medicine) in 2012, MS - Orthopaedics from B P Koirala Institute of Health Sciences , Dharan in 2010, MBBS from Armed Forces Medical College (AFMC) and Pune in 2005. He carries his medicinal practice at Jain Ortho Clinic in Daliganj(Lucknow) and Back & Neck Clinic in Gomtinagar(Lucknow). He is a respected member of Indian Orthopaedic Association, Association of Spine Surgeons of India (ASSI) and AOSpine international board.

Dr. Ashish Jain is registered as a Medical Practitioner at Medical Council of India (MCI) since 2007. Registration Number - 07-31169 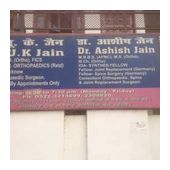 Spinal Fusion It Is A Surgical Technique That Joins Two Or More Spinal Columns.

Chronic Pain Treatment Chronic pain may feel sharp or dull, causing a burning or aching sensation in the affected areas for at least 12 weeks and can be treated in both oral and topical ways.