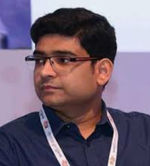 Dr. Manish Mahajan is one of the most esteemed Neurosurgeon and Neurologist in Gurgaon.He holds an experience of 15 years in medical field. He has been been honored with Dr. A D Sehgal Award for the Best DNB Resident in Neurology - 2012 award and Bronze Medal in Pharmacology - 1999 award. He has completed his DNB - Neurology from National Board Of Examination in 2013, MD - General Medicine from Sardar Patel Medical College, Bikaner in 2009, MBBS from Government medical College and Hospital and Patiala in 2001. He carries his medicinal practice at Artemis Hospital in Gurgaon Sector 51(Gurgaon) and Sumitra Devi Memorial Neuro Centre in Gurgaon Sector 56(Gurgaon). He is a respected member of Indian Academy of Neurology, American Academy of Neurology - AAN, Association of Physicians of India, European Academy of Neurology, International Parkinson and Movement Disorder Society and Indian Medical Association (IMA).

Dr. Manish Mahajan is registered as a Medical Practitioner at Delhi Medical Council since 2011. Registration Number - 50722

Vascular Brain Diseases It is a Brain disease, connected with blood vessel in the brain which are damaged and the brain tissue is injured.