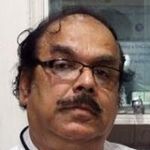 Dr. P. Bhattacharya is one of the most esteemed Diabetologist and Endocrinologist in Kolkata.He holds an experience of 44 years in medical field. He has been been honored with National Health Care Excellece Award In DI Diabetology - 2016 award, One Of The Leaders To Fight Diabetes - 2008 award, Recognition As Global Diabetes Leader For Prevention Of Diabetes By Newzealand Parliament - 2007 award, Beast Diabetes Physician - 1998 award and Best Citizen Of India - 1998 award. He has completed his FAACME (USA) from American Academy in 2011, PhD in Liberal Studies in Diabetology (Trinity College) from Trinity College, University Of Dublin, Ireland in 2009, FNIER from National Institute of education & research in 2006, FACP from American College of Physicians in 2005, FIDC (USA) from International diabetes centre in 2005, WHO-HIV Fellowship from World Health Organisation in 2000, FICN from International college of nutrition in 1988, Post Graduate Diploma in Diabetology (PGDD) from M. Viswanathan Diabetes Research Centre, Chennai in 1985, Fellowship in Diabetology from M.V. Diabtes Hospital & Research Centre. in 1982, DTMH from University Of Calcuta, India in 1978 and MBBS from Kerela University in 1974. He carries his medicinal practice at Sparsh Diagnostic Centre in Bansdroni(Kolkata) and Serum Analysis Centre in Shyambazar(Kolkata). He is a respected member of World Health Organization (WHO), European Association for the Study of Diabetes (EASD), International Diabetes Federation (IDF), Research Society for the Study of Diabetes in India (RSSDI), DIPSI, Indian Medical Association (IMA) and Diabetes In Pregnancy Study Of India.