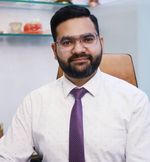 Dr. Vishwas Madan is a renowned Dentist, Periodontist and Implantologist in Navi Mumbai. He has 11 years of experience in medical field. He has been awarded Double Gold Medalist in Dental Surgery in Periodontics and Implantology - 2016 award, Original Research On Use Of Herbal Agents In Treatment Of Gum Disease Published In International Journal - 2016 award, Acknowledged For Original Research On Implants By BARC Panel - 2015 award, Awarded The Prestigious TATA Merit Scholarship Twice For Exceptional Academic And Clinical Performance - 2014 award, National Award Winner For Best Scientific Deliberation At IDA, Mumbai - 2012 award, Best Student of the Batch 2007-2012 - 2012 award, Gold Medalist In Oral Surgery - 2011 award, Nominated For The Prestigious Perre Fauchard Academy Award For Best Dentist - 2011 award, Invited As Special Guest To International Conference At Shanghai, China - 2011 award and Awarded The IDA Colgate Merit Scholarship For Being The Topper Of The Batch - 2011 award. He has completed his MDS - Periodontics from MGM Institute of Health Science, Bombay in 2016 and BDS from MGM Institute of Health Science, Bombay in 2011. He currently practices at Ivory Dental & Physiotherapy Centre in Seawoods(Navi Mumbai). He is a prominent member of Indian Dental Association, American Dental Association, Academy of General Dentistry and Indian Society of Oral Implantologists (ISOI).

Dr. Vishwas Madan is registered as a Medical Practitioner at Maharashtra State Dental Council since 2012. Registration Number - A23749

8, Balaji Complex, Next to Bank of Maharashtra, Sector-46 A, Nerul, Near Navaratna Hotel

Advanced Surgery In Implantology The advanced surgical procedure to implant artificial tooth root that is inserted into the jawbone increase the dental density.

Presurgical Orthodontics Presurgical orthodontics involves dental decompensation, alignment of the teeth within the arches, leveling of the curve of Spee, and coordination of the lower and upper jaw bone.

Scraping Periodontal Periodontal scraping/ scaling is a non surgical procedure wherein plaque and tartar from above and below the gum line are scraped away.