Sex reassignment surgery for gender dysphoria and transgender body dysmorphia, is a procedure that enables an individual to transition to their self-identified gender. The transition process starts with progesterone, testosterone or estrogen HRT or hormone therapy. A male-to-female reassignment surgery involves transitioning people assigned male at birth (AMAB), into transwomen. The surgery involves a ‘top’ surgery, ‘bottom’ surgery, and facial feminization surgery.

According to data from the social justice department, gender reassignment surgeries are on the rise in various parts of the globe.

Even Robotic surgery is an effective alternative to penile inversion in most cases and vaginoplasty in transgender cases.

Robotic surgery is a revolutionary advancement in surgery;

It is performed by using very small tools attached to a robotic arm.

Now you must be thinking what the need for hormone therapy in male to female surgery. Let's read along to know in detail.

In hormone therapy, female hormones such as estrogen and progesterone are injected into the male body. The female hormone helps to create a more feminine look. Anti-androgens are used for this therapy because males produce more androgens than females.

Male to female transgender hormone therapy costs you around $30 per month. And a therapist's visit can cost you about $100.

Let's read ahead to what male to female gender reassignment surgery costs.

What does MTF top surgery cost?

The first surgical procedure in the male to female gender reassignment surgery is breast augmentation and implants surgery. Through plastic surgery, you can easily get your desired breast size through this method.

Insertion and implants are the two components of breast augmentation surgery. The price may vary depending on the hospital and surgeon.

The MTF Breast augmentation surgery cost is given below:

What is the male to female (MtF) bottom surgery cost?

We have listed all the MtF bottom surgery costs to help you know better.

1. Penectomy Surgery: Penectomy is a gender-reassigning surgery that involves removing the penis. Transwomen who no longer wish to keep their penis can opt for this.

2. MTF orchiectomy surgery: An orchiectomy is an operation in which one or both testicles are surgically removed. While transitioning from male to female, transgender women may opt for an orchiectomy.

The MTF orchiectomy cost is around:

3. Vulvoplasty: Vulvoplasty is a lower-body surgery that involves the creation of the vulva and the removal of the penis, scrotum, and testes. 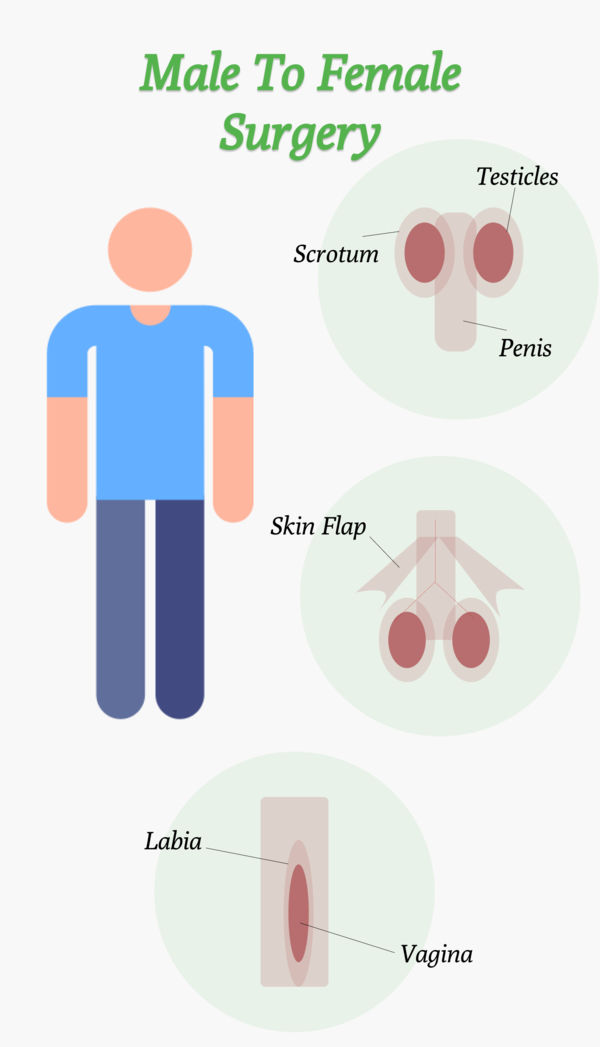 5. MTF Vaginoplasty: During vaginoplasty surgery, a surgeon uses skin and tissue from the penis to build both an outer and inner vagina. Your surgeon will employ a skin graft to build a new vaginal canal during most vaginoplasty.

6. MTF Hip Widening Surgery: In this surgery, implants or autologous fat(own body fat) transfers are used to add or remove volume in the hips and buttocks. This surgery aims to get rid of extra fat or add fat to your hips and leave a smooth curved line.

What is included in facial feminization surgery and its cost?

Face feminization surgery, often known as FFS. It is a cosmetic surgery that transforms male facial traits into feminine features. Facial feminization surgery is a set of surgeries aimed at repairing, reshaping, and rebuilding facial traits. It can include lip and cheekbone augmentation, relocating the hairline to create a smaller forehead, contouring and resizing the jaw and chin, and so on.

1. Tracheal shave: A tracheal shave is a facial feminization surgery involving shaving the trachea. It's utilized by trans women and non-binary trans people who want to make their faces look more feminine.

It is commonly known as "Adam's apple reduction surgery." The cost of a tracheal shave is around $ 640. 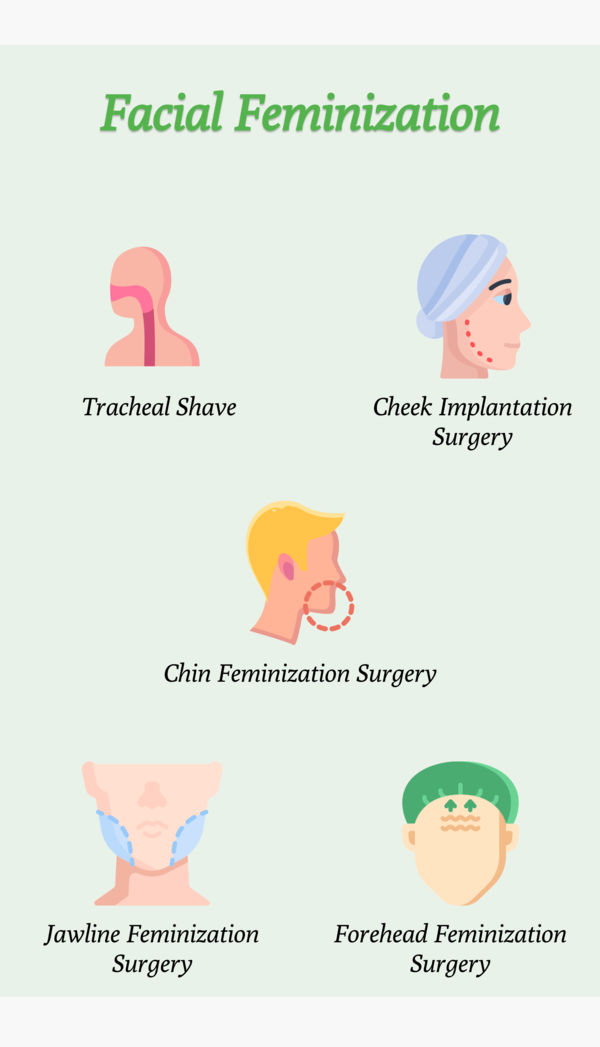 2. Cheek Implantation Surgery: Cheek implants are commonly known as cheek augmentation. It is used to make the cheeks fuller and more feminine or enhance the cheekbones.

3. Chin Feminization Surgery: Chin feminization surgery is also known as chin enlargement surgery. It helps to enhance the features of the chin and jawline, making them more feminine in structure and wide in appearance.

5. Forehead Feminization Surgery: Forehead surgery is also known as hairline lowering surgery. It is a part of feminization surgery. In this procedure, the height of the hairline is reduced by removing the extra skin on the forehead. 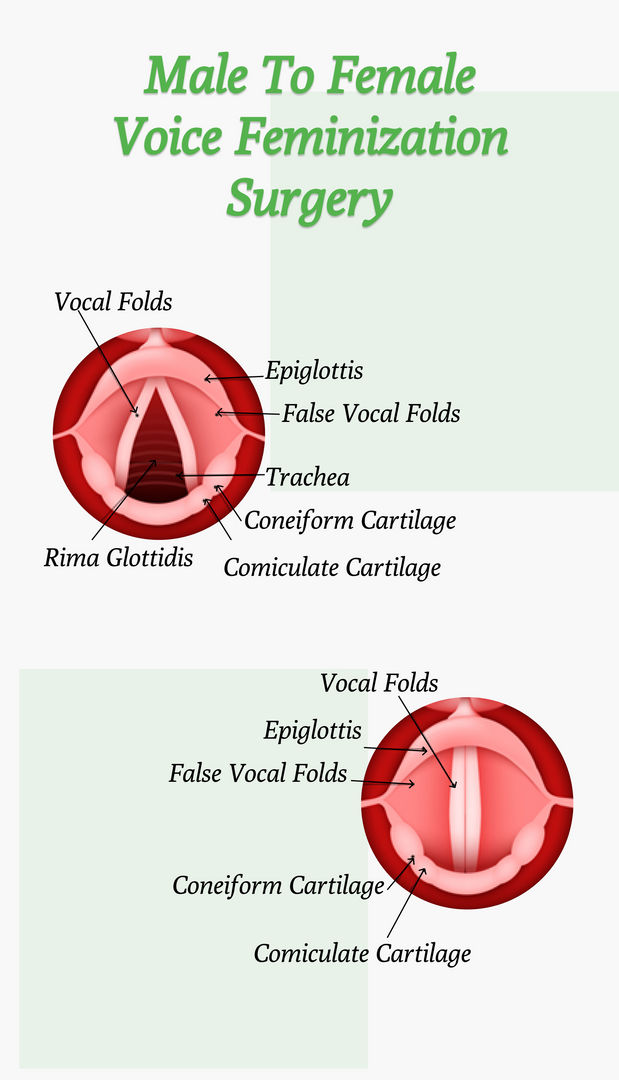 6. Voice Feminization Surgery: The technique of changing a person's voice to a high-pitched tone is known as vocal feminization. It is done to have a more feminine appeal.

The cost of voice feminization is around $1,026 onwards.

You must be looking for the cost of male-to-female sex reassignment surgery in different countries. Let's read ahead. 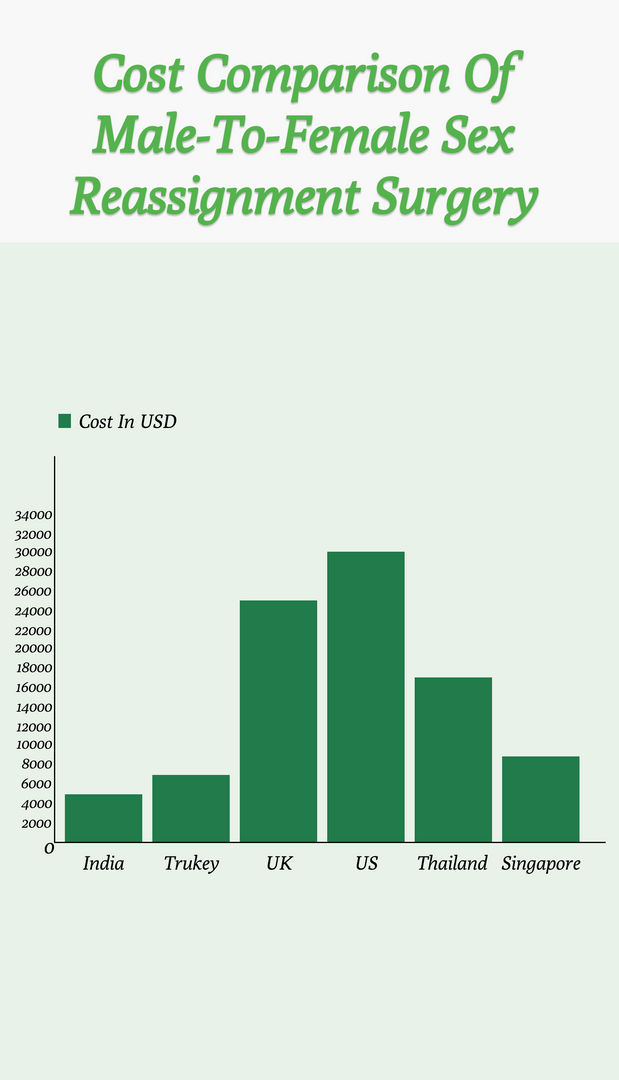 Factors affecting the cost of male to female surgery

The number of surgical procedures performed for gender reassignment is on the rise. With the surge in cases, the male-to-female surgery cost is also becoming more affordable and nominal in Asian countries compared to other nations. However, a few factors still affect the total cost of surgery.

1.) How long does a male to female transition take?
Some of the transitions may take less than a month and some can take even years. It mostly depends on the mental and physical health of the person and what kind of treatment you are involved in.

2.) How long does it take to grow breasts on estrogen?

The estimated time is 2 to 6 months to grow breasts through estrogen. It also depends on factors like fatty tissue levels, body genetics, etc.

3.) How long does it take to recover from male to female surgery?

It takes an average of 2 to 8 weeks to recover from male to female transition surgery. However, penectomy and vaginoplasty are major surgeries that need more care and usually take longer to recover.