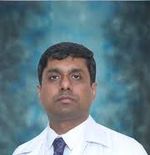 Dr. Prashanth K is a reputed Neurologist and Neurologist in Bangalore with over 21 years of experience. He has pursued his Fellowship in Movement Disorder (Toronto) from Toronto Western Hospital in 2011, DM - Neurology from National Institute of Mental Health and Neurosciences (NIMHANS) in 2008, MBBS from Mahadevappa Rampure Medical College and Gulbarga in 2001. He currently practices at Vikram Hospital in Millers Road(Bangalore) and Parkinson's Disease & Movement Disorders Clinic in Rajajinagar(Bangalore). He holds membership of Member of Parkinson's Research Alliance of India (PRAI), Member of Indian Academy of Neurolgy (IAN), Founding Member of Movement Disorders Society of India, Member of International Parkinson's Disease and Movement disorders society (MDS) and Karnataka Medical Council.

Dr. Prashanth K is registered as a Medical Practitioner at Karnataka Medical Council since 2001. Registration Number - 59244

71/1, Vasanth Nagar, Opposite to St Annes College & Beside Navnit Motors

Spinal Tap The Removal Of Fluid From The Spine In The Lower Back Through A Hollow Needle, Usually Done For Diagnostic Purposes.

Brain Aneursym Surgery Brain Aneurysm Surgery is a surgical procedure used to treat a bulging blood vessel in the brain that's at risk of rupturing or tearing open.