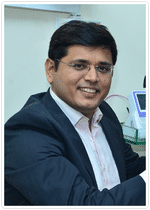 Dr. Rahul Kumar is a reputed Dentist, Cosmetic/aesthetic Dentist, Implantologist, Endodontist, Restorative Dentist, Periodontist, Prosthodontist, Oral And Maxillofacial Surgeon and Pediatric Dentist in Thane with over 14 years of experience. He has been bestowed with Awarded with Best Dentist of The Year - 2016 award, Awarded With Best Endodontist (Root Canal Specailist) In Mumbai, India - 2015 award, Best Endodontist at Famedent award - 2015, Awarded With Best Endodontist At Famedent, Thane, Mumbai - 2014 award, Best Endodontist at Famdent award - 2014 and Best Clinic of Year at Famedent - 2013 award. He has pursued his Certificate of Oral Implantology from USA in 2013, Certificate Endodontics & Pedodontics from USA in 2012, Certification in Laser Dentistry from USA in 2012, MDS - Conservative Dentistry & Endodontics from Maharashtra Universtity of Health Sciences, Nashik in 2012, Certification In Re-Root Canal Treatment from Maharashtra Universtity of Health Sciences, Nashik in 2011 and BDS from BHARATI VIDYAPEETH'S DENTAL COLLEGE &HOSPITAL PUNE in 2008. He currently practices at Dr. Rahul's Dentaville, Esthetic, Laser & Microsco in Thane West(Thane). He holds membership of Indian Dental Association, Indian Endodontic Society, Indian Academy of Aesthetic & Cosmetic Dentistry and American Academy of Cosmetic Dentistry.

Dr. Rahul Kumar is registered as a Medical Practitioner at Maharashtra State Dental Council since 2007. Registration Number - A-13869

Endo Surgery Or Apicoectomy When Inflammation Or Infection Persists In The Bony Area Around The End Of Your Tooth After A Root Canal Procedure, An Apicoectomy Is Performed

Metallic Crown Fixing The metallic crown is a type of dental restoration which completely caps or encircles a tooth or dental implant.

Paedodontics It Is The Branch Of Dentistry That Deals With Children's Teeth.

Teeth Straightening It Is Done To Straighten Crooked Teeth With The Help Of Braces Or A Surgical Procedure.