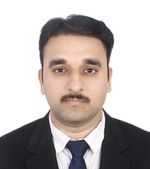 Dr. Rangarajan. B is a highly skilled Ayurvedic Orthopedist, Ayurveda and Neurologist in Bangalore. He holds an experience of 7 years in medical field. For his contribution in the medical field he has been awarded Most Promising Young Researcher in Kayachikitsa - 2019 award. He has done his MD - Ayurveda Medicine from SKAMC in 2018, ACLS from Appolo Hospital, Hyderbad in 2016 and BAMS from SKAMC in 2015. He currently consults at Ayurcentral in Indiranagar(Bangalore), Balaji Vaidyashalaya in Shivaji Nagar(Bangalore) and Ayurcentral in Kr Puram(Bangalore). He is a honorable member of NIMA, IJRULA, IAA and PAPA.

Dr. Rangarajan. B is registered as a Medical Practitioner at Karnataka Ayurvedic and Unani Practitioner's Board since 2015. Registration Number - 32698

Alopecia Areta Treatment The treatment given for Sudden hair loss that starts with one or more circular bald patches that may overlap.

Skin Allergies The reaction of the skin to allergens which may cause red, itchy rashes and may include small blisters or bumps.

Corn Removal In This Procedure, The Doctor Will Remove The Corn (A Hardened Layer Of Skin Which Develops When Your Skin Tries To Protect Itself Against Friction And Pressure) By Performing Minor Surgery.