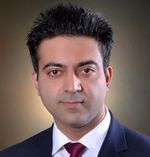 Dr. Sunil G Kini is a highly skilled Orthopedist and Ortho Surgeon in Bangalore. He holds an experience of 20 years in medical field. For his contribution in the medical field he has been awarded IOA Thailand ambassadorship - 2014 award, SICOT German travelling fellowship - 2012 award and Lester Lowe SICOT Award - 2010 award. He has done his Fellowship in Knee & Hip Surgery from University College of London Hospital in 2015, M.Ch - Orthopaedics from University of Seychelles in 2011, MRCS (UK) from Royal College Of Surgeons in 2010, MRCS (UK) from Royal College Of Edinburgh in 2010, MNAMS - Orthopaedics from National Academy of Medical Sciences (India) in 2009, Dip.SICOT(Belgium) from SICOT, Belgium in 2009, DNB - Orthopedics/Orthopedic Surgery from Diploma National Board in 2008, MS - Orthopaedics from Rajiv Gandhi University of Health Sciences, Bangalore, India in 2007, MBBS from Rajiv Gandhi Institute of Medical Sciences and adilabad in 2001. He currently consults at Manipal Hospital in Old Airport Road(Bangalore) and Mak Speciality Health Center in Sarjapur Road(Bangalore). He is a honorable member of Indian Orthopaedic Association, Royal College of Physicians and Surgeons of Glasgow (RCPSG), The Royal College of Surgeons of Edinburgh (RCSED), Soci&Atilde;&copy;t&Atilde;&copy; Internationale de Chirurgie Orthop&Atilde;&copy;dique et de Traumatologie (SICOT), Karnataka Medical Council, Medical Council of India (MCI), General Medical Council (GMC) and UK. Scoliosis Correction The correction of the curvature of the spine (Scoliosis) by methods like surgery and bracing.

Tailbone Pain Treatment Tailbone Pain Is A Pain In Or Around The Bony Structure At The Bottom Of The Spine Which Can Be Treated By Physical Therapies, Medications And Other Treatments.