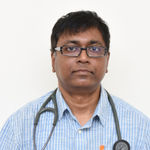 Dr. Dipak Ray is one of the most esteemed Rheumatologist in Kolkata.He holds an experience of 21 years in medical field. He has been been honored with Core Medical Training in UK(Hartlepool Medical Rotation, U.K) - 2001 award and Core Medical Training in UK(Scarborough Medical Rotation) - 1999 award. He has completed his FRCP from Royal Colleges Of Physicians Of Edinburgh, Uk in 2009, CCT - Rheumatology from South West Peninsula Postgraduate Deanery in 2008, MSc-Clinical Rheumatology from University of Manchester, UK in 2004, MRCP (UK) from Royal Colleges Of Physicians,london, Uk in 2001, MD - General Medicine from Manipal Academy Of Higher Education, Manipal, India in 1995, MBBS from University Of Calcuta and India in 1990. He carries his medicinal practice at Fortis Hospital - Anandapur in Anandapur(Kolkata). He is a respected member of &bull; Fellow of Royal College of Physicians of Edinburgh, U.K and &bull; BSR (British Society for Rheumatology).

Scleroderma Treatment The treatment of scleroderma by means of medication, therapies and surgeries (in some cases)