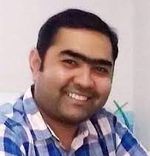 Dr. Rohan Talathi is one of the most esteemed Dentist and Pediatric Dentist in Pune.He holds an experience of 14 years in medical field. He has completed his MDS - Paedodontics And Preventive Dentistry from College of dental sciences davanagaer in 2012 and BDS from P.M.N.M. Dental College Hospital, Bagalkot in 2007. He carries his medicinal practice at Rohan's Multispeciality And Children Dental Clinic in Pashan(Pune). He is a respected member of Indian Dental Association.

Dr. Rohan Talathi is registered as a Medical Practitioner at Karnataka State Dental Council since 2008. Registration Number - 23129A

Traumatic Injuries Dental Traumatic Dental Injuries (Tdis) Of Permanent Teeth Occur Frequently In Children And Young Adults. It Often Occurs As A Result Of An Accident Or Sports Injury.

Advanced Surgery In Implantology The advanced surgical procedure to implant artificial tooth root that is inserted into the jawbone increase the dental density.

Dental Screening And Prophylaxis Part of your dental checkup, prophylaxis is used to remove dental plaque and other irritants from the oral cavity. As these deposits build on your teeth, they form dental tartar, which contributes to most dental problems.

Osseointegrated Implants Osseointegration Implant Is The Process That Allows Dental Implants To Become A Permanent Part Of Your Jaw.

Periodontal Flap Surgery Or known as Gingival flap surgery is used treat to periodontitis, it is serious gum infection that damages gums and can destroy the jawbone .

Partial Denture Of Mold Molding Is A Part Of The Denture Manufacturing Process Which Is Done With Wax For Preliminary Impression Of The Patient's Mouth To Create A Diagnostic Cast.